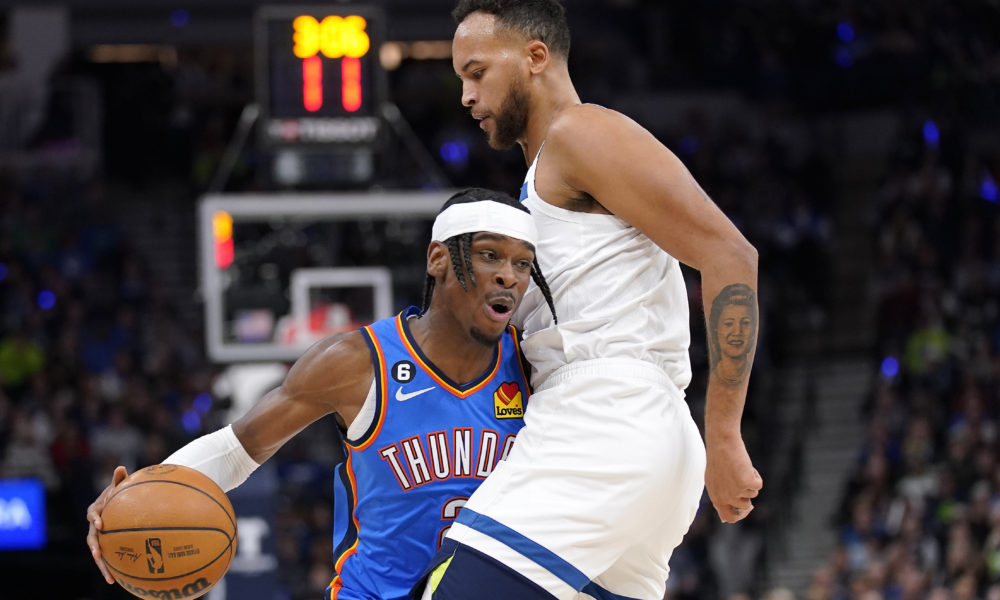 Oklahoma City – The OKC Thunder hit the road for their season opener Wednesday night against the new look Wolves and it no matter what the Thunder put out on the floor they were going to be outmatched with the size the Wolves possess.

The Wolves have a new look twin towers with Rudy Gobert and Karl Anthony Towns that they use and to offset that the Thunder went with a starting lineup of Shai Gilgeous-Alexander, Lu Dort, Josh Giddey, Kenrich Williams, and Aleksej Pokusevski. No player classified as even a PF in the lineup.

It was very interesting and it didn’t work to start the game. The Wolves got whatever they wanted in the paint and it was very obvious that head coach Mark Daigneault would need to adjust because the Wolves lead would grow to as big as 16. The Thunder wouldn’t let the lead get too outrageous but the Wolves were still getting everything they wanted.

The Thunder did finally make adjustments at halftime and went with a bigger starting lineup and it helped them have a very hot 3rd where they won the quarter 35-22 to get back into the game.

At the end it was close and the Thunder had their chances to win but just had some minor mishaps at the end and the Wolves took full advantage. Thunder ended up falling to the Wolves 115-108 and start the season off 0-1.

Here are the 3 reasons for the opening night loss:

This shouldn’t be a surprise to anyone. The Thunder lack size and teams are going to try and take full advantage of it every single night.

This was also against a team that has Rudy Gobert who isn’t known for his offense and Karl Anthony Towns who didn’t even make a shot inside the 3 point line. There will be teams that have more skilled guys that try to score in the paint so the Thunder will need to figure out a way to offset their lack of size or teams could set records on them in the paint.

The Thunder, on paper, are a much better 3 point shooting team than they’ve been in the last few years.

Shooting 14-45 (31.1%) from the 3 point line the Thunder were extremely off for most of the game. There were plenty of good shots for them that they just missed so this isn’t too much of a concern after only one game but there were also plenty of times where they settled.

Some of those 3 point shots could have been mid range shots given the Wolves play drop coverage and didn’t really believe in the Thunder 3 point shooting. At some points of the game it seemed like Gobert being in the paint turned the Thunder off from driving, which is exactly what the Wolves wanted, and they settled for 3s.

If the Thunder can turn some of those 3s into drives or midrange shots they probably win the game but again, this isn’t much of a concern after game 1.

As mentioned before, the Thunder were outmatched in size against the Wolves but were able to out-rebound the Wolves 57-55 which might have been a surprise to some but it shouldn’t be because the Thunder work hard and should be a good defensive team.

That’s the game right there.

In a game that ended up coming down to the last few possessions in the last couple of minutes you can’t let a team get 24 second chance points. Thunder simply have to be better in that aspect because that stat isn’t because they had a lack of size, it’s a lack of effort and attention to detail that young teams absolutely need if they want to create winning habits.

The Thunder were led by Shai Gilgeous-Alexander who had a slow start but was able to find his rhythm and show he’s as star with 32 points, 6 rebounds, 5 assists,  3 steals, and 2 blocks. Josh Giddey was able to add 14 points, 11 rebounds, 4 assists, and 2 blocks while Aleksej Pokusevski adding 11 points and 7 rebounds and Lu Dort 10 points and 6 rebounds while holding Anthony Edwards to only 4-17 shooting. Tre Man was ok off the bench with 12 points.

The Thunder stay on the road for one more game to play the Nuggets Saturday night before their home opener on Sunday.