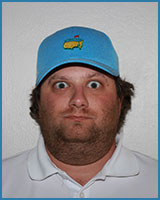 Eddie is the newest addition to the Franchise Morning Show. Born and raised in the heart of the 405, he is a proud graduate of Putnam City North High School. Following a subpar athletic career as a 6A bench warmer, he attended the University of Oklahoma and graduated with a degree in broadcast journalism. When he’s not mixing it up in the morning, Radosevich is a videographer and staff writer for SoonerScoop.com of the Rivals.com network. A close personal friend of Russell Westbrook he is currently serving as a co-chair of the Championship Parade Planning Committee (CPPC), while living in the urban core known as downtown Oklahoma City. During the off-season you can find him at any of the local golf courses, waiting out his time until a run at the Champions Tour.

Todd played football and basketball for four years in high school, and was named Little All-City football first team by The Oklahoman in 1999. Attended Ottawa University in Kansas and lettered in football as an offensive lineman for a year, before injuries forced him to give up football. Currently lives in Midwest City with his 2 basset hounds, Julius and Dallas. Todd loves to golf, fish, and watch soccer… for some odd reason.