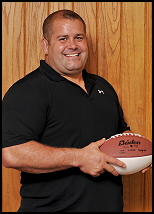 Kelly was a 3-time state wrestling champion at Edmond North High School and the 1994 Daily Oklahoman’s Defensive Player of the Year before playing football for the Sooners at the University of Oklahoma. Drafted by the Cincinnati Bengals in the 1999 NFL Draft, Kelly played 13 seasons in the NFL and 11 with the Baltimore Ravens earning a Super Bowl ring when the Ravens won Super Bowl XXXV.

Jerry has been paying his dues since 1992, when he started out as a DJ at a weekly sober night dance. Since then he’s traveled the OKC metro finally ending up as a producer/co-host on The Franchise. Jerry is also the Thunder postgame co-host, OU pregame co-host and is considered the third best athlete at the station. In his spare time he is the prototypical husband and father. You can see him regularly taking out the trash and dropping off his daughter at Girl Scouts.