Mark Daigneault; Is He A Place Holder Or Thunder Coach Of The Future? 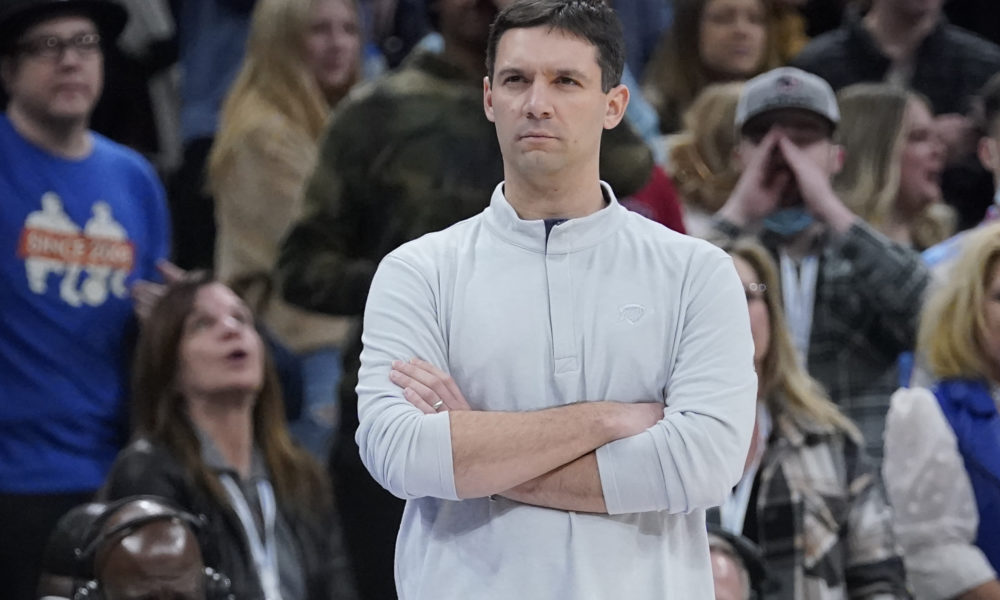 Mark Daigneault; Is He A Place Holder Or Thunder Coach Of The Future?

The Thunder season is officially over and in some ways it ended the way fans and maybe most in the franchise would have wanted. At 24-58, they finished with the 4th worst record in the league which gives them the 4th best odds in the draft lottery.

Now it’s all about the future.

There are lots of questions surrounding this franchise and how they are going to go about the future. Whether it’s if they will tank again next season, how will Shai Gilgeous-Alexander and Josh Giddey co-exist, will Dort take whatever extension the Thunder offer him or become a free agent, what happens if they don’t get one of those top 3 big men, and lots more.

One of the biggest questions though, is whether head coach Mark Daigneault is the guy to lead them when they’re ready to contend for playoff spots or even championships.

If you listen to any of the players, he the guy you want.

Every single player raved about Daigneault and talked about how he’s a players coach and how he cares about them more than he cares about basketball.

All of the @okcthunder players love playing for Mark Daigneault. They talked about how he’s a players coach and really cares about them as people. Here are a few of the responses when I asked how it was playing for him: pic.twitter.com/zdsTnnd0qq

…I think he deserves a lot of credit because he’s been able to take and really run with some different things and really make them better…Jannero said, hey, you’d better listen, Mark is going to be coaching in the NBA one day, and that was years ago, and that was my first time, I was like — so he sees what I see, okay. But when you hear that from a guy that’s been there and is now — has every reason to be grumpy about the situation because he’s been not staying in a Best Western playing basketball, I’ve seen that, and we’ve spent so much time together that we — it’s like not finishing each other’s sentences. That’s not what I’m saying. It’s building on that. So it’s like, how did we come up with that again? You don’t know, because he can take ideas and make them his own, and vice versa, and there’s no ownership over that, which I think helps in the development of players.

See everyone loves him.

Daigneault has created an atmosphere where the players love being around each other and that’s not an easy task. It does make thing easier that most of the guys on the roster are 24 or younger but it’s still not that easy to do. Every single player mentioned the word togetherness and how that’s how they were able to stay positive throughout the season. That is also because of Daigneault. Truly a players coach.

Now, one could say that’s just about him being a good person and has nothing to do with the on the court stuff and that would be true. Him being a great person and someone the players love and want to play for doesn’t automatically make him a good coach or mean he’s a good X’s and O’s guy.

Here’s why anyone saying that would be wrong though.

This team wasn’t put together to win. They were put together to develop and see which guys could be part of this franchise for the future. So when you have a young team, Thunder were the youngest, the main thing you want to see is if the players are getting better year from year and throughout the year. The Thunder guys did. Look at guys like Lu Dort and Darius Bazley’s improvements they made from the first year with Daigneault to this season and then looking at how guys like Theo Maledon and Aleksej Pokusevski improved throughout the season. Not to mention the improvements of Shai Gilgeous-Alexander, Josh Giddey, and Tre Mann from last year to this year and from month to month.

Daigneault has shown the ability to develop players from year to year but also from month to month and that’s an extremely underrated attribute to have as a head coach.

So he’s a good developmental coach. But that only takes you so far because at some point that young team becomes a veteran team and there isn’t much need for development anymore so what happens then?

He coaches elite defense. The Thunder offense was horrendous and needs a lot of work which will likely come with more talent coming but their defense was legit. They ended the season with the 17th best defense which really isn’t that bad considering they were the youngest team in the league but before most of their team go hurt, the Thunder had a top 10 defense. That isn’t an easy task at all.

Generally, young teams aren’t good defensive teams because young players generally aren’t good defensive players. It takes time for them to get used to the speed and physicality of the NBA. Somehow, the Thunder somehow defied all the odds. Again, it’s because of Mark Daigneault. He was able to get those guys to buy into a defensive system where they’re all always active and aggressive but in a way without fouling.

That isn’t an easy task.

In fact, that’s the biggest reason the Thunder had as many wins as they did. A lot of teams like to turn it on on the offensive end but in a lot of the Thunder wins this season they flipped the switch on the defensive end. As the saying goes, defense wins championships and if the Thunder have a guy that can coach great defense when he doesn’t really have defensive players and when the team isn’t set up to win imagine what he would be able to do with better defenders and when the team is ready to start winning.

So what do we have?

A players coach that all the players love and want to play for. Someone who knows how to develop young talent from year to year and from month to month who also knows how to coach great defense even when he doesn’t have the defenders for that.

Why exactly is it a question if he’s the guy to lead them in the future?

Thunder Grades: Tre Mann
The Center of the Sports Universe