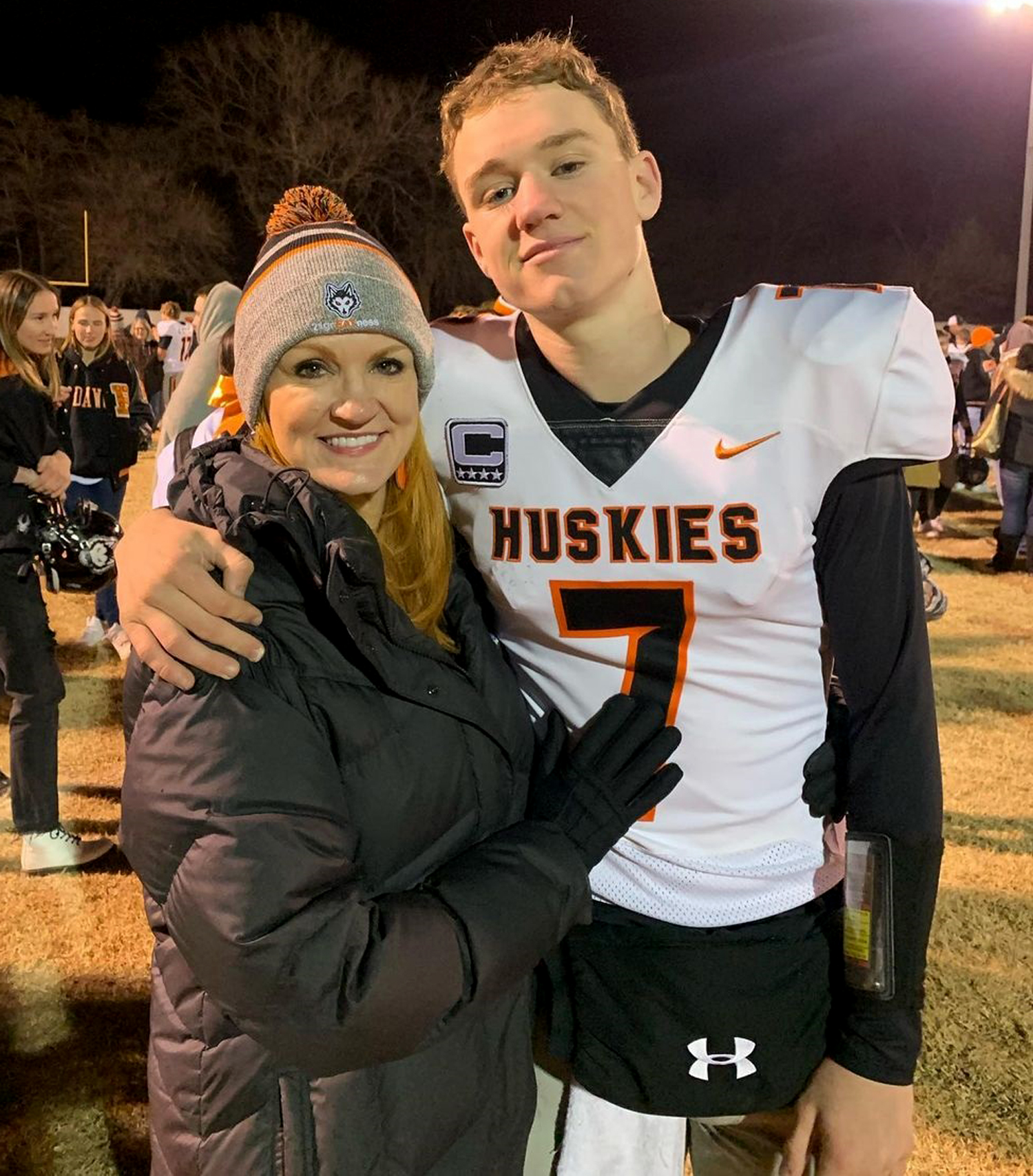 Todd Drummond stands up, smacks the dirt off his orange and white pants and stares at the massive defensive lineman across the line.

Seconds before, that same lineman cracked him at the line of scrimmage, hauling him down for a sack. Naturally, as it goes, trash talk flowed towards Drummond, although not targeting his football skills, his Pawhuska High School team or anything dealing with their school’s rivalry.

No, the defender pokes fun at his world-famous mom.

“There’s always guys from rival schools saying, ‘Your mom can’t cook,’” Todd said. “People have been saying that from this one school since I was in sixth grade.

“We’re about to be seniors in high school. Get some new material.”

So it goes for Todd, a prep quarterback prospect who can’t help but follow Oklahoma State from his home just 81 miles northeast of Boone Pickens Stadium. His mom’s Food Network show, The Pioneer Woman, is one of Food Network’s highest-rated programs. Todd’s been seen helping out among the camera crew during shows shot on site in Pawhuska, so he’s familiar with the spotlight.

Then there’s the massive 433,000-acre ranch his family owns and operates. Todd firmly sits in a superstar family. He can’t walk through Walmart without seeing walls of his mom’s products or cookbooks.

But Todd wants to create his own legacy – and he plans to do so through a college football career.

Todd tossed for 3,685 yards, 50 touchdowns and nine interceptions during his junior season at Pawhuska last fall. He already has an offer to play Division I football at Lamar University and was invited to OSU’s Junior Day in January.

That day in Stillwater, OSU assistant coach Jason McEndoo immediately took notice of Todd’s chaperone, who happened to be his favorite Food Network host. He even took a picture with her and shared it on social media. This is hardly a common thing for coaches to do, but then Todd is no ordinary recruit.

“Got to meet my favorite @FoodNetwork (star) @thepioneerwoman today at @CowboyFB #GoPokes,” McEndoo wrote in a since-deleted tweet.

Todd is prepared for moments like this. Coaches constantly acknowledge his mom’s fame and make jokes about it. He always responds with laughter and humility.

Todd isn’t at all weary of his mom joining him on visits. In fact, according to Ree, he never fails to steal the show with his personality.

Motivated by hunger pangs, the 6-foot-4, 190-pound quarterback jolts from his bed, sprints down the colossal hallway and knocks on his mom’s door.

“Can you make my favorite snack?” Todd asks.

She knows exactly what to cook. Ree ignites the stove, plops pads of butter on the pan, followed by two slices of bread with unorthodox toppings: peanut butter and jelly. The sweet and savory aroma puts 17-year-old Todd in a trance, anticipating what he hopes is an aid in an effort to meet his weekly caloric goals for football. This grilled peanut butter and jelly and a tall glass of whole milk should do the trick.

“I told her that I would like to put on 10 to 15 pounds before next season,” Todd said. “So I just asked if she could put it in her hands because she’s the professional cook.”

Not many athletes have the luxury of a famous chef preparing their food, but Todd uses it to his advantage.

“She can make anything,” Todd said. “So she definitely makes sure I don’t get tired of anything, because if I do, she’ll just start cooking up some more stuff and some more stuff.”

The best part? Ree doesn’t see this as extra work. She views Todd’s bulking journey as a fun experiment that will help her son.

“It almost feels like a family project to assist Todd in this endeavor of bulking up and gaining weight,” Ree said. “He’s such a good kid that he’s so appreciative of anything I cook for him.”

“I’ve personally had some of Ree’s cooking and I can say it is absolutely delicious,” Wilson said. “We eat at her restaurant for pregame meals a lot and it’s always great.”

He would emulate both his playing style and personality. When faced with a hard hit on the field, Todd reacts the same way Luck did.

“I’ll say ‘Hey, great hit,’ to a defensive lineman and they’ll get mad at that,” Todd said. “That’s what Luck used to do. I started getting into football in 2012 and he was really popular back then.”

If it irks defensive players, it makes it even more sweet for Todd. More so than Luck, it was Todd’s family members who taught him that being nice was the best option. Todd’s parents raised him to be respectful, and he shows this anytime he can.

“My mom and dad have just always talked to me about being respectful to people,” Todd said. “Don’t give anybody any reasons to get you in trouble. Just be a good person and do what God would want you to do.”

These values were instilled in Todd since his childhood. Since he follows them daily, his family has more motivation to support him, a product of equal parts nurturing and tough love. His father, Ladd, makes him help out on the large ranch, giving Todd a workout and a lesson in hard work. Todd’s older brother Bryce, who plays Division I football at North Texas, has a competitive yet motivating sibling rivalry with him.

“(Todd and Bryce) fought just as much as any brothers did,” Ree said. “But they also had a strong streak of support for each other too, especially in that quarterback club. They both know the challenges and what a mental position that is.

“And so they do have that support for each other, but they also are the first to give each other a really hard time.”

He even gets his teammates in on the ranch grind. When Todd brought Wilson to help on the ranch one time, Wilson gained a new respect for his friend.

“He’s dragged me along to go do some work with him before, which is not fun at all,” Wilson said. “I think that really speaks to his work ethic because he’s doing that type of stuff all the time on top of all the work he puts in for football.”

Todd said his strong relationship with his family makes him a better football player. Ladd, who played football at Arizona State, and Bryce talk football and go over film with him, while Ree makes grilled chicken so he can build muscle. His parents, despite their hectic schedules, make every Pawhuska game. It’s a family project and Todd, who is the youngest child, makes the experience enjoyable.

“We joke that we saved the best for last because Todd’s just a complete joy to have around,” Ree said. “And he’s so coachable, according to his coaches, and teachable.”

Todd’s pleasant nature resonates with coaches, even though his sport is dominated by hitting. During games last season, Todd would call his quarterbacks coach, Owen Jordan, who was in the upstairs booth, to discuss what he could improve during the next possession. Even in poor performances, Todd always ended calls with “I love you.”

In response, Jordan would jokingly say “Thanks, bye.”

During a lopsided win last season, Jordan finally said “I love you” back, causing Todd to immediately call back.

“It surprised him enough that he called back upstairs to confirm what I had just said,” Jordan said.

Todd stays up late thinking about his future.

He’s gotten used to Food Network’s cameras situated at his house and his mom being recognized everywhere they go. But his family’s fame and atypical life still intrigues him.

“It’s crazy,” Todd said. “Sometimes I’ll sit back and think, ‘Man, my mom’s TV shows really aired for 10 years of my life. So I’ve done this longer than I haven’t.”

The surroundings are no distraction, however. Todd remains focused on his college football dreams. He practices everyday, constantly thinks about nutrition and carries the right attitude when thinking about his goals.

His coaches think he has a shot at achieving greatness.

“Being 6-foot-4 and 190 pounds as a junior puts him in a category that already fits the mold of a high-level quarterback,” Jordan said. “He has next level arm talent to go along with the rest of his physical gifts.”

Todd, as well as mom and dad, are OSU fans. And while the quarterback holds no offer from the Cowboys, yet, another big season at Pawhuska High could elevate his profile with major college schools always on the search for quality quarterbacks.

And think of the baked goods that could come from home.

While his famous last name could have easily swayed his career goals, and trajectory, Todd remains determined to carve his own path.

“Todd doesn’t act like he comes from a famous family at all,” Wilson said. “He’s a really down to earth guy. If you’d never seen him on TV, you wouldn’t know his family was any different than anyone else’s.” 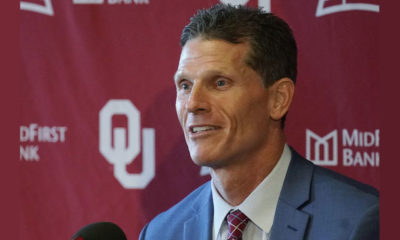